With spring training in full swing and April right around the corner it is almost time for the Phillies’ regular season to begin. The Phillies open up the season on the road against the Braves on March 29th. Here is a projection of what the lineup is going to look like for the Phils in their season opener.

The Phillies will most likely keep Cesar in the leadoff spot like they did for almost all of last season. In the 128 games that he played in last year he batted leadoff in 124 of them. The fifth year second basemen finished last season with a batting average of .294 to go along with nine home runs and 34 RBI.

Although the Phillies have some decisions to make with the outfield this year with the amount of young talent to put out there this is almost a lock. The former All-Star played in 138 games last season and posted a .281 batting average along with 14 home runs and 56 RBI. Even though Oduble has had his mishaps through the years he will most likely be the everyday center fielder for the Phillies this season. 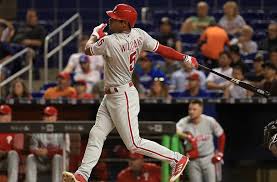 This is the spot that is the biggest question mark going into the regular season. The choice between Nick Williams and Aaron Altherr as the everyday right fielder. But, the nod will most likely go to Williams because Altherr spent a lot of time on the DL last season. Williams only spent half the season last year with the team and batted .288 with 12 home runs and 55 RBI.

The final spot in the outfield will go to the rookie sensation that took the MLB by storm late last season. Hoskins made the most of his first impression in the big leagues from the moment he was first brought up. In just 50 games last season Hoskins hit 18 home runs and had 48 RBI to go with a .259 average. With a small sample size of the MLB under his belt and a full season ahead of him the sky’s the limit for this bright young star.

Although Franco has been a very streaky hitter for the Phillies in the recent past he will most likely be batting behind Hoskins. This strategic move might be able to help Franco with his recent hitting struggles. Putting him fifth inbetween the power hitting duo of Hoskins and newly acquired Carlos Santana Franco may see better pitching. Last season Franco hit for an average of .230 with 24 home runs and 76 RBI in 154 games.

At the end of last season it seemed that Rhys Hoskins would be taking his normal position of first back at the start of this season. But the Phillies shocked MLB this offseason by going out and signing free agent slugger Carlos Santana. Santana spent last season with the Cleveland Indians where he batted .249 with 23 home runs. Adding another slugger to the middle of the lineup is one of many moves the Phillies have made to get the team back on track to being a winning baseball team.

Another late call up from the Phillies last season that helped the team finish the year on a positive note. Jorge Alfaro only played 29 games last season but in that short time showed that he has the potential to be the Phillies’ catcher of the future. Alfaro batted .318 with 5 home runs and 14 RBI.

J.P. Crawford showed great versatility last season playing second base, shortstop, and third base, and looks like he is going to be the everyday shortstop for the Phillies this season. Crawford played the least amount of games out of the new wave of call ups the team had last year but the glove skills he showed earned him his spot for this season. Some offensive struggles have him batting eight which is usually where the catcher bats. Crawford’s batting average last season was .214 and had six RBI in only 23 games.

The biggest shakeup to the Phillies roster happened just yesterday when the Phillies went out and signed the 2015 CY Young winner. Prior to this signing the team said that Aaron Nola was going to start this game but after this big signing he will mostly likely be moved to the second spot in the rotation. Last season Arrieta had a record of 14-10 with an ERA of 3.53 to go along with 163 strikeouts.

Born and raised in Philadelphia I am 21 years old, currently attending Holy Family University studying a degree in sports management-marketing. I am a die hard Sixers fan but have love for all Philly sports teams.

Ranking the Top 5 Phillies Since 2000

What to Expect With the 2020 Phillies

This site uses Akismet to reduce spam. Learn how your comment data is processed.